This month our cook-n-critique was a switch.  Instead of all of the "real women" going by ONE BOOK, we switched it up and did a theme.   Breakfast and Brunch and we got to choose our own cookbook.   We still drew the dish out the hat though... I picked savory, but really wanted to do a stuffed french toast so Cupcake switched with me.   (She also can be nice when she wants to.)

Do you know I don't own the first cookbook that has such a recipe?!?!?   I know, I couldn't believe it either!
I thought I did, but it must've been something I took out of a magazine or something...somewhere.  But since the "rules" are that it must be from a cookbook that anyone can get their hands on, (i.e., not out of print, or handed down, or internet only...) I couldn't do it.  Soooo...  I turned to my Pioneer Woman Cooks, cookbook by Ree Drummond and  chose her (famous) cinnamon rolls! 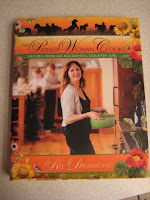 I blogged about it with the recipe on my other website  SweetJeanette... Go read it sometime - but not now!  (giggle)

Now, in order to make these lucious beauties I needed to face my fear.  If you've been reading this blog long, you might guess what it is... 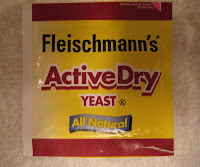 No, not Fleischmann's....  YEAST!
Maybe it's better stated that yeast doesn't like me.   As a young(er) bride, about 30 year ago (I know, I can't believe it either since there's no way I look that old!  LOL)  I tried to make yeast rolls.  These "things" turned out to be nothing more than little flying saucers and I haven't attempted anything with yeast since then...until now.
I'm happy to say, these turned out as they should! 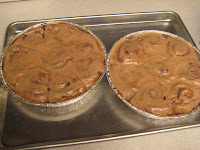 Wanna know how I know??? 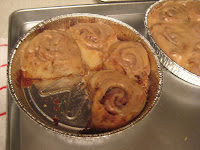 The trademark of every good Southern cook!  LOL 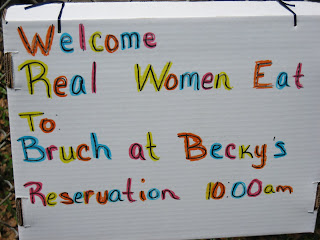 ok, the secret is out....Buttercream is really Becky!  LOL 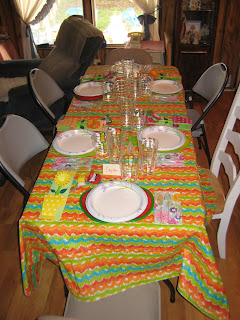 Doesn't this look festive?
She won (if there was such an award) the award for the best gifts!  She really outdid any previous hostess' favors!  Just look ... 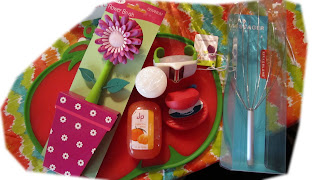 Underneath was a cutting board.  The cutting boards were our placemats! We had lemons and tomatoes.  Starting from the left to the right, we had in the cute flower pot, a scrub brush, candle, soap, a silicone do-hickey for pulling hot pans out of the oven, or handling hot pots, and to the far right... a head massager!!!   Cupcake demonstrated it and said she tingled!  and the neatest zester! (We all went ga-ga over this!) 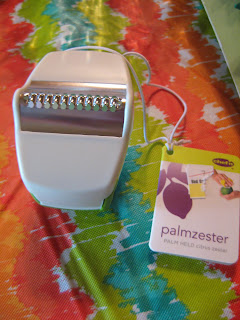 Can you see the glasses?  There were two, a juice glass and regular....Those were our favors too!!!
Oh, and she served a wonderful banana slush punch!  Yum-O!!!
Buttercream is my sister, so get a load of MY placecard she prepared... 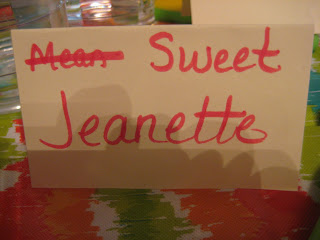 that's just wrong!  Wrong, I say!
You know that RealWomen are my cousins and an aunt.  Well, we had another cousin that day.  My brother-in-law is a mechanic and was going to take a look at this cousin's car so we just invited said cousin in to eat with us and be our "honorary real woman" for the day.... 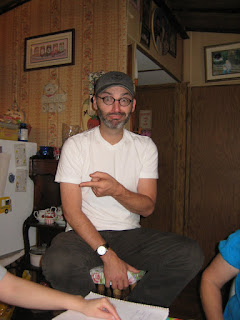 Sorry Kenny!
We stuck poor Ken on a stool, but he did  help us critique the dishes and was a big help. 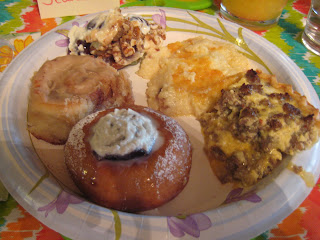 I'll post more pictures in the actual "Critique" part of our Cook-n-Critique for April.
So until later, enjoy!

Posted by sweetjeanette at 4:14 PM